This was partly inspired by a post made by SmokeyTheOwlbear, as well as by K6BD, Karanduun, Crisis Jung, Fist of the North Star, Afro Samurai and a few other pieces of media. 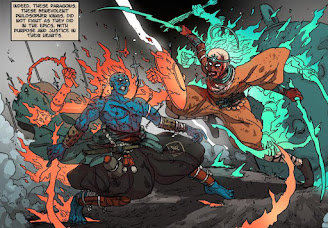 The Book of Universal Revelation
There is a 5% chance for the Book of Universal Revelations to appear in any large library or book collection. The book is not indexed anywhere and must be found, but will usually be in the Mysticism, Warfare or Art sections.
The book is written in the most abstruse way possible, and needs to be studied for a month to gain any benefit from it. After every week of study, a save vs spell must be made: whatever the outcome, the reader suffers the effects of a Confusion spell for 12 hours. A week of fasting and self-mortification give a +1 bonus to the week's save.
After 4 weeks, if the reader did succeed at least 3 saves, they will have learned one of the mystical martial arts techniques in the book, determined randomly. Regardless of whether the reader has learnt anything, the book will then disappear and materialize somewhere else.

Each technique can be used a number of times daily equal to 1 + 1 if cleric + Int MOD, and can be used in place of any other action in combat, using the attackers Attack Bonus.

It is possible to learn multiple different arts. Should an already known art be rolled, the next one below is learned, with the exception of #10, which can only be learned when a 10 is rolled; every subsequent 10 allows to delve deeper into the mystic art of senseless murder.
Using any technique to kill an opponent, or even just using the tenth technique, forces all onlookers to save vs spell or suffer the effect of a Fear spell.

Email ThisBlogThis!Share to TwitterShare to FacebookShare to Pinterest
Labels: mechanics